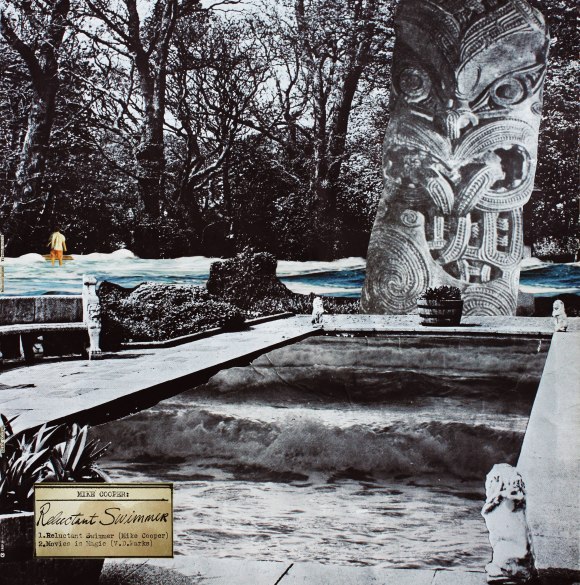 Here’s one to file under “strange but strangely wonderful”. The first 11 minutes of the A-side is Reluctant Swimmer, an ambient experimental thing which seems to be done on a prepared guitar, all scrapes and bloops and rattles: it sounds oddly like you’re inside some kind of arcane machine but in a much softer, more relaxed way than I normally mean when I deploy that particular metaphor; this is a hand-made and hand-cranked machine of wood and ratchets and springs. This segues directly into a moving cover of Movies Is Magic, a song by Van Dyke Parks which appeared on Orange Crate Art, his troubled early-nineties collaboration with Brian Wilson. The vocal is intimate and heartfelt and works brilliantly over the continued clanking noises and some simple sustained chords. (Key lyric: “Movies is magic / Real life is tragic / And fundamental though it seems / When you’re livin’ in your dream / When you wake up it’s over”.) The B-side follows a similar pattern. Virtual Surfer is even more abstract than Reluctant Swimmer, featuring field recordings of birdsong as well as some unidentifiable probably-guitar-based noises. This segues into Fred Neil’s 1966 folk song Dolphins (a song I vaguely knew, though I’m not sure whether it was the Neil’s version or Tim Buckley’s), and very lovely it is too. This then drifts off into a final few minutes of crackling and buzzing, a fittingly off-kilter ending to a truly splendid record. Experimental music has rarely been so affectingly emotional.

I bought this from Boomkat. They call it Folk / Roots, which seems to be stretching a point.