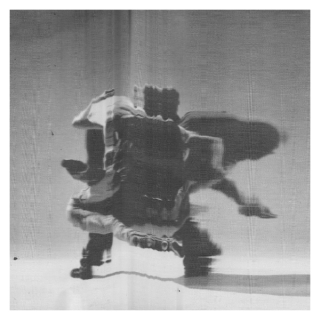 If I have one complaint about this album from (sorry) the less well-known half of Yellow Swans, it’s simply that at 31 minutes it’s too short. Otherwise, it’s magnificent. It’s primarily guitar drones and percussion, although for much of the first part of the record it sounds like the guitar is being bowed or scraped somehow. Album opener Contained Battle / Ascend features a sort of wondrous howling over a tribal drumming. Ear Piercer and Mountain Music are dominated by sparse, abstract percussion — resonant chimes, which create a powerfully ritualistic feeling, feature strongly on the former, and a heavy bass drum on the latter. The climax is reached on the 11-minute Gagaku, which slowly becomes more densely layered until, at about the 6-minute mark, a warm, fuzzy guitar melody gently appears: that particular noise inevitably invokes the mighty Christian Fennesz, although this is definitely late-period anthemic Fennesz à la Bécs, and powerfully uplifting it is too. The closing track is a little bit different: it’s seemingly a heavily-processed take on a Miles Davis recording of My Funny Valentine, all vinyl crackle and submerged dynamics and woozy trumpet, it’s very Leyland Kirby, not at all gimmicky, and strangely affecting. All in all, a fantastic record, warm and approachable despite its experimental nature, that leaves me wanting more.

I bought this from Juno. They call it Ambient / Drone.